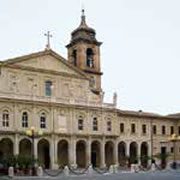 Take the stairs in front of the Chiesa Nuova in the Santuario di Greccio up to the road, where you will turn right. Before reaching the cross at the panoramic overlook, climb to the left and, at the crossroads, continue along the trail which climbs to the left. Begin the steep climb. At the time of printing, this trail was under maintenance. If you find it closed, follow the longer alternate route shown on the map.
After around 700 meters, the trail meets up with a road paved in stone. Continue on the progressive ascent for about 1 kilometer, when you will reach a level meadow where you can take a last look at the Valle Santa. At the first crossroads, continue on the level trail to the right. Cross the green plateau Piani di Ruschio, circled by thick woods. The route continues straight and level through hornbeam and chestnut trees, over the Prati di Stroncone meadows. At the campground (km 4.16), pass the bar on the left and turn right, descending on an asphalt road. Along this route you will pass a number of stone markers commemorating the passage of Saint Bernardine of Siena, placed by the Franciscan community in Stroncone. Continue downhill; after about 3 kilometers you will reach the entrance to a villa on the right. Leave the asphalt road here, turning right following the signage for the “Sentiero Francescano”. Continue along a rocky mule track, which can get slippery when wet. At the crossroads, continue right along the level route to the large shrine, ignoring the route downhill to the left. As you descend, you will pass a marble plaque on the left (“the bed, the hand, the chair of Saint Bernardine”). Continue on along an easy mule track through a small wooded valley. Shortly after passing the La Cappellina della Madonna del Tresto (km 11), covered in ex-votos, the road widens and you need to keep right. Continue along the trail, which meets up with the asphalt road in various points, until reaching the Chiesa della Madonna di Colleponte. In less than 1 kilometer you will reach the Piazza della Libertà in Stroncone (km 13) and, soon after, the Santuario di San Francesco d’Assisi.
From the piazza, descend along Via dell’Orno, skirting the city walls. At the stop sign (km 13.6) in front of a hotel, turn right and, after 100 meters, right again toward Vocabolo Colle. Continue downhill and, near the curve, leave the asphalt road by turning right onto a rocky track, then left. Pass the football field on the left and continue through the intersection (km 15.2), following the signage for “Cisterna”. Climb along the asphalt road which curves to the left, and pass an interesting shrine with a water fountain, ignoring the side road for San “Simeone (Cammino dei Protomartiri Francescani)”. A steep climb along a cement road begins here; after about 200 meters take the mule track downhill to the left near the wooden fence. The route continues under the shade with glimpses over the countryside through the trees. Begin climbing again and, at the fork with three routes, keep right, continuing straight uphill past the side roads. After about 150 meters from the preceding crossroads, turn left downhill. The route continues along a series of easy ascents and descents, meeting back up with the asphalt on Via Perticara (km 17.2). From here, continue towards Terni following the curve to the left without leaving the main downhill road. At the crossroads, turn right and then left on Via F. Turati (km 21). At the traffic circle, turn left on Via G. Brodolini to reach the Basilica di San Valentino. From here, descend along Via Papa Zaccaria, turning right on Via Mentana and then picking up Via F. Turati again. Cross the bridge over the Nera, continuing along Via dell’Annunziata and Via del Vescovado until reaching the Cattedrale di Terni (km 23). For the Chiesa di San Francesco, take Via 11 Febbraio, Via F. Fratini and then Via Fratti.