Via Benedicti is a long itinerary crossing over the Apennines from Umbria through Lazio, which includes the longest stretch of the itinerary, before coming to an end in Cassino just a few kilometres from Molise and Campania.

From north to south, the route takes in various abbeys founded by St. Benedict and his followers. They are often sites commemorating key moments in the saint’s life or paying witness to the diffusion of a doctrine which was more than just spiritual and religious; it represented the first step towards rebuilding a civil life based on the values of work, culture and solidarity considered to be the foundations of European civilisation.

With the exception of departure from the city of Norcia which was the birthplace of the saint and his sister, Scholastica, to whom the Basilica of San Benedetto and thechurch of Santa Scolastica are dedicated to, the section of the itinerary which runs through Lazio starts from the Abbey of Santa Maria di Farfa. This is the most important monastic site in the area which held control over other small abbeys that have since been restored or changed their usage.

They are extremely breathtaking buildings, set amid nature, just a short distance from the neighbouring towns and all located within Rieti province: the Abbey of San Pastore in Contigliano, the Abbey of Santi Quirico e Giulitta in Miciliano and the Abbey of San Salvatore Maggiore in Concerviano.

The itinerary moves from Farfa to Rome and to the great Basilica of St. Paul Outside the Walls, the largest catholic basilica in Rome afterSt. Peter’s. The journey through the region then moves inland to follow the first route which St. Benedict took to find the ideal location for his hermitage.

And the first stop is Subiaco, high up on the rock overlooking the Aniene Valley which boasts a lush nature featuring sometimes turbulent springs and dense woods which has now been transformed into the Regional Park of Monti Simbruini. Benedict started his hermitage in these places, in a grotto on the slopes of Mount Taleo, commemorated by the Monastery of Sacro Speco and a little further away by the Monastery of Santa Scolastica.

Before arriving in Subiaco, we recommend you stop off at Vicovaro where you can find a site which specifically recalls the hermitage of Saint Benedict and his followers. This is the Convent of San Cosimato, next to which you can find several grottoes inhabited by these hermit monks.

Continuing along the same route heading towards Subiaco, a detour leads you to the most breathtaking of all the Benedictine sites, the Sanctuary of Mentorella in Capranica Prenestina.

After visiting the Monasteries of Sacro Speco and Santa Scolastica, you leave behind the province of Rome to head towards the mountains of Frosinone where the first site on route is the Carthusian Monastery of Trisulti in Collepardo and, further south, the beautifulGothic Cistercian Abbey of Casamari, in the town ofVeroli.

The last stop leads us to the important Abbey of Montecassino, the real core of Benedictine devotion. St. Benedict founded his first monastery here and wrote the Sancta Regula. Despite the many times it has suffered destruction over the years, the most dramatic of these at the end of the Second World War, the abbey has always been rebuilt and holds onto its appeal of the great religious and cultural experience of St. Benedict and his followers.

The beauty of the abbey has been improved on over the years, with the addition of important architectural features such as the one attributed to Bramante who built a large cloister, and it continues to be a centre of conservation and diffusion of cultural heritage thanks to a series of events and well-stocked library.

The long journey through the life and works of St. Benedict comes to an end in Cassino. The point of departure and the finish can easily be inverted, including in accordance with a symbolic and conceptual logic. In Norcia, the point of departure is provided by the saint’s birth, while in Cassino it is provided by his decision to found a monastery and monastic order there.

Just a short distance away, in Molise, we can find the small monastery of San Vincenzo in Volturno, for those who wish to add some other stops to the route which is none too easy to follow on foot. It would take over 24 hours alone to walk from Cassino to Subiaco.

Three of four days amidst nature on ancient roads running from the Liri Valley to the Aniene Valley, would allow us to see how much commercial and economic development has changed the physiognomy of these areas, with itineraries and routes that were once a central part of life being forgotten.

The use of public transport or private vehicles, especially cars and motorbikes, can make it possible to experience one of the most important phenomena of European culture, from a religious viewpoint, in a relatively short period of time. 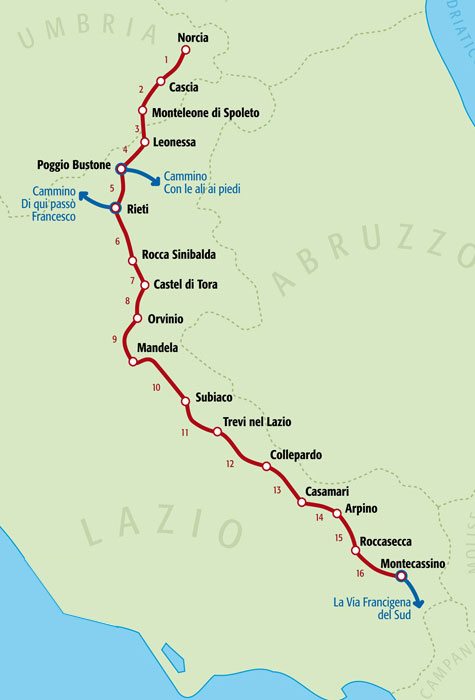