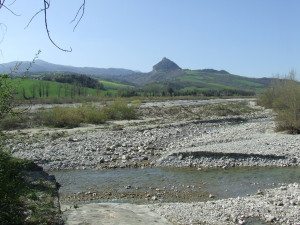 The route goes into the beautiful landscape of the middle-high Valmarecchia, dominated by rugged cliffs and crowned by fortresses. You  walk mainly on roads unpaved and some stretches of asphalt. From the cloister of Santa Croce you continue straight on Via Convento, getting off at SP Marecchiese, and after it you come back to the historic and naturalistic trail along the right bank of the Marecchia to Ponte Verucchio. Here you cross the river and proceed on the left  just below the rocky cliff on which stands the hermitage of Madonna di Saiano. After a few hundred meters a moving iron bridge guarantees, during the summer,  to get back on the ford across the river. In the months when it is not possible to cross the river, you can proceed to walking towards to Ponte Verucchio with the variant described in the guide.

After crossing Marecchia River you can keep going on the naturalist trail to Ponte Santa Maria Maddalena. From here there are some roads that starting to go up and alternating asphalt and unpaved paths, where you can enjoy a breathtaking view of  San Leo (still distant), Pincio and Aquilone Mountains also known as the “Bishop Sleeping”, for the unmistakable shape that is considered an important point of orientation for Pilgrims’s Romea Path who came down to Rimini to pass though Valmarecchia and then walk towards Rome by Viamaggio Pass (called “Via Major”). After crossing pastures, cultivated fields and wooded patches, you reach the Cloister of Sant’Igne, one of the most important point of the itinerary.

From the convent the town of San Leo is easily accessible, by the final stretch with the beautiful view of the cliff dominated by the imposing fortress, such as recalls Dante’s Divine Comedy.

Hence the May 8, 1213 St. Francis received as a gift from Count Orlando Catani of Chiusi, the mountain of La Verna, which became one of the most important places in the history of Franciscans. This episode is considered so significant for the town which St. Francis is depicted in the civic emblem under the elm tree from which he preached.

On the central Dante square stands Palazzo Nardini, within which is located the room, converted into a chapel, where it would take place the meeting between St. Francis and the Count Orlando Catani.