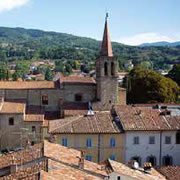 The urban route through Sansepolcro is unmarked. From the Duomo take Via Matteotti; at the corner, turn right onto Via XX Settembre and continue to the intersection with Via dei Lorena, where you will turn left. Continue on Via Senese Aretina where a bit of city traffic begins; be particularly cautious of passing vehicles, especially near traffic circles. This section is uninteresting, passing through an area of large industrial sheds. Pass under the highway overpass, reaching a yellow building on the right (km 3); turn left here towards Podere Violino on the Strada Vicinale Reglia dei Molini. There is little city traffic here, and you follow the level and asphalted main road. When you reach Gricignano (km 5.54), cross through the town and, after passing a colorful preschool building, be careful to continue straight rather than taking the Via Pio La Torre to the left, marked by a red and white sign. The road you are following now is a shortcut. In the distance you begin to see Citerna; here you will come across your first yellow and blue Saint Francis’ Way signage (km 7.48). You have now entered Umbria; from now on there will be ample signage along the route, guiding pilgrims to Assisi. At Fighille (km 8.7), turn right on Via del Pozzo, and, after 200 meters, left on Via Gabbiotti. Do not take Via Palazzo Manfroni, instead climbing first right and then left on Via del Cimitero. You are crossing the Umbrian countryside now, through tilled fields and farmhouses. After the cemetary, you will reach a curve (km 9.42). Turn left here, leaving the asphalted road for an unpaved road. When you reach the gate of a villa, descend to the left. At the end of this descent, the road becomes asphalt again and soon after you reach the foot of Citerna. From here (km 10.8), the signage directs you to turn right onto an unpaved road, but you can also continue straight on the asphalted road, ignoring the signage and reaching the Convento degli Zoccolanti (km 11.76). If, instead, you follow the signage onto the unpaved road, the route is a bit longer and at a slight incline. The two routes meet up again near the Convent, from where you continue climbing until reaching the fortified town of Citerna (Km 13).