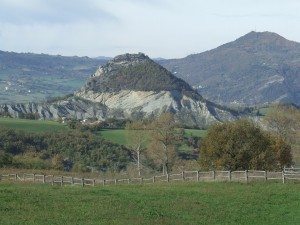 You go down again to the valley and then up on the opposite ridge that borders the left hydrographic bank, beyond which, in the Valle del Savio, there is Sant’Agata Feltria. The stage twists and turns most entirely though dirt tracks, with some stretch of asphalt.

It starts in the direction of the rocky cliff of Maioletto, visible from the center of San Leo, while you are walking you can admire the wonderful landscape from San Leo to Il Poggio, a small town lined up on a crest. You can cross it though a beautiful scenic route, with suggestive passages of deep ravines, passing through a clayish area, which may be arduous in the rainy periods. After arriving at Maioletto cliff, turn on the left inside the wood, descending until you reach a bridge over Marecchia river. If you cross it crossed you can visit Novafeltria.

Turn left on the bike path that goes up the Marecchia and follow it to the height of Torricella, birthplace of the Servant of God “Blessed” Father Francesco from Torricella which is reached through the SP. Marecchiese.

The paths goes forward to narrow roads and cattle tracks to the ridge road, at the height of Botticella fraction. Turn left in the direction of Sant’Agata Feltria and follow it to the chapel of the Madonna del Soccorso, from where left a wide path, with even the white and red signs of the San Vicinio Way leading up to Sant’Agata feltria at whose doors we find the Convent of the Capuchin Friars (quarters) and the Convent of the Poor Clares (quarters).

The village is one of the main “Franciscan places” of Montefeltro. An ancient tradition reports that St. Francis discovered this territory, most likely in May 1213. The presence of the Poor Clares area is contemporary  San Francis, as the Monastery of Saint Antimo, whose foundation is traced to Agnes, Saint Clare’s sister, in 1218, six years after the foundation of the Convent of St. Clare at San Damiano in Assisi. It is considered the second oldest monastery of the Poor Clares order. The Capuchin monastery was built in 1575-77. For a long time it was also present the Friars Minor who moved in Rocca Fregoso 1781 to 1820, abandoned the old convent of the Plans, dating back to the sixteenth century.