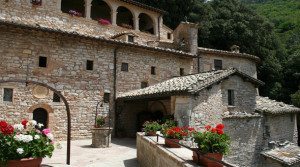 Mount Subasio was home to a number of hermits even before the time of Saint Francis; the saint and his brothers began to retreat to a small chapel and surrounding grottoes on this mountain around 1206. The oldest part of this convent dates from the middle of the 15th century; it was expanded to its present size over the following two centuries. Francis held great esteem for the hermitic life of prayer and penitence (FF 669; 764-765).