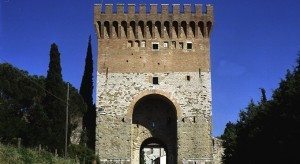 As the district of which it is the entrance Door, it takes its name from the really ancient paleo Christian church dedicated to the Archangel S. Michele. It is the biggest of the medieval doors, fortified by Ambrogio Maitani in 1326, opened inside the medieval walls of the XIV Century. Outside it presents three levels, of three different construction phases, each marked by the use of different materials. The first is sandstone, as the walls of the same age. The second level was made with limestone, probably dating back to the ‘70s of the XIV Century; this part was expressly wanted by the “legato pontificio” (Papal Legate) Gérard du Puy, known as Abbate di Monmaggiore, who, considering the strategic importance of the place linked it to the fortress of Porta Sole and to the Porta di S. Antonio. The third level, made of bricks (1416-24), was projected by the Architect Fioravante Fioravanti, following the orders of the Lord of Perugia Braccio Fortebracci. The definitive transformation in keep, with trapdoors, slits and embrasures dates to 1479 .

Entrance: free of charge Tuesdays-Wednesdays 9:30 am -12:30 am; Fridays- Saturdays and Sundays upon reservation and the offer of a contribution.