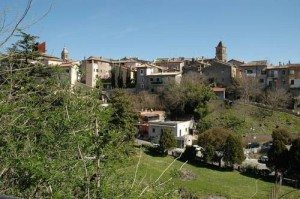 From Campagnano (97) take the SP10 to Formello up to the sports facilities (98), then climb up Via Maria Bona, follow the directions of the Via Francigena to the park of Veio and the Sanctuary of the Sorbo (99).

You can avoid passing the center of the town of Formello (100), taking Via Monte Madonna, then right in Via Grottafranca, then left on Via Spinareta, via Baccanello and Via Ficoraccia to the junction with the SP12 Fornellese near an overpass on SS2 Cassia. In order to bypass this junction take a right turn towards the new bridge over the river Cremera (101). From the bridge take the fenced path and reach Via Antonio Battilocchi following the original track of the Via Amerina as it was before the Roman Conquest in 396 BC and enter the archaeological site of Veio near the tomb of the Leoni Ruggenti (i.e. roaring lions, the most ancient painted Etruscan tomb). Today there are no building and the walls and the town can only be imagined from the layout of the terrain. Take the road to the left that goes up and then levels out for about 400/500 meters until the excavations of the ancient forum (entering on the right by the second gate) (102). Crossing the area of the ancient city (Monday is closing day), you can visit the site of the Etruscan Sanctuary of “Portonaccio”, then exit at the old mill next to a striking waterfall and Etruscan bridge. Continue along the road that passes by the cemetery of Isola Farnese until you reach the top, where you will find a fontanella (103), at the crossing turn immediately right toward La Storta, only 3 km away. The hostle of the Poverelle in via Baccarica 5, is located near the Cathedral of the Sacri Cuori di Gesù e Maria (Sacred Hearts of Jesus and Mary) (104), rebuilt after the destruction of the WWII. At the foot of the Cathedral is a chapel in memory of the famous vision of St. Ignatius of Loyola, founder of the Jesuit Order, during his pilgrimage to Rome. Holy Mass in the chapel every morning at 8.

From the Cathedral / Chapel of the Visione di S. Ignazio (104) take to Isola Farnese. Just below the village

(103), turn left towards the cemetery and the archaeological excavation of Veio, cross the small Bridge of the Mola and the area located within the old walls of Veio. When you reach the top of the area of the Forum (102), at the first intersection, turn left towards west, cross the SP12A that goes to Formello and continue on via Antonio Battilocchi going downhill along the fenced path to the new bridge over the Cremera stream (101). Continue after the underpass of the Cassia to the left on Via della Ficoraccia, a small stretch of Via Baccanello, then via the Spinareta. You reach Via Grottafranca, where eventually you can make a deviation to Formello (100). If instead you head towards Via di Monte Madonna almost immediately you will see a sign to the left indicating “Il Sorbo”. This is the Madonna del Sorbo (99), a Shrine located halfway between Formello and Campagnano, in the Park of Veio. From the shrine, turn left and continue until you reach a fork to the right of Via delle Piane that climbs up Monte Razzano and then go down Via di Maria Bona close to the municipal swimming pool and join the SP10A next to the sports grounds (98). From here you will soon reach the main square of Campagnano Romano in front of the Gate that leads to the old town. Those staying at the parish center (97), should continue on the left for about 500 meters. A part of this route is marked by the yellow arrow and small pilgrim logo of the same color that indicates the way to Santiago from Formello/Ficoraccia.