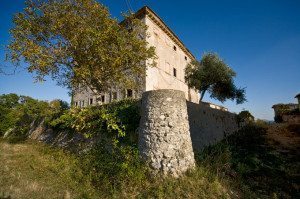 From Todi to Castel dell’Aquila (km 19)

Starting from the central Piazza del Popolo (27) and leaving the old town through Porta Amerina (also called Porta Fratta) (28), take Via St. Raffaele that leads rapidly downhill, after a short stop at the Romanesque church of S. Stefano (St. Stephen), follow Via delle Piagge to Ponte Naia (29). Pass by the Chapel of the Beata Vergine del Perpetuo Soccorso, then follow the sign to Fiore (along the sports grounds) to the small church of Santa Maria delle Grazie, built by Antonio Di Domenico PGR in 1734 on a previous shrine of the 1500 (30). A little further on take the dirt road to the left, along the banks of the Arnata stream, and head towards Torricella. Immediately after the only house you’ll find on the left along the climbing road, you meet a path that leads to a new walnut plantation, after which the road again enters the forest and at the first intersection, turn right in the direction of Ospedaletto di Vasciano (31) or ancient hospital of S. Maria Maddalena. The road continues south along the right bank of the Arnata stream until you reach the beautiful Bridge of Pesciano (32), always keeping an eye on the hill in front for Torre Olivola (a strategic defense tower along the Via Amerina, characteristic of this part of the territory).

After crossing the bridge continue along the left bank of the Arnata to Ciuccio’s Mill (now called the Mill of the English) (33). About 100 meters after the Mill, the path again enters the thick woods, and after only 200

meters to the left, it fords the creek of Civitella, a tributary of the Arnata.

Crossing the creek, continue on the route of the ancient Via Amerina between thick woods, until you meet the wire enclosure of the Azienda Faunistica Anguillara and then up to the remains of a bridge, ponte della Falce (34), near the Olivieri/Pesciano Mill. After crossing the bridge, turn right and follow the climbing path that skirts the enclosure of the Azienda Faunistica Anguillara until you reach the top of the hill, in front of the Mestaiola of Sismano (35) (a small shrine dedicated to St. Eurosia). Then you should head downhill towards Forte Cesare (39) and Castel dell’Aquila (40), that can be seen towards the south. Slightly to the left is also the small town of Avigliano Umbro with the unmistakable square tower of the aqueduct.

1) at Ciuccio’s Mill, leave the road just before the building and head left towards the Arnata, that you must cross on a small pedestrian bridge, then follow the dirt road for about 3 km to the Olivieri/Pesciano Mill (this enables to bypass the fording of the creek of Civitella, that especially in winter has lots of water).

2) at the Olivieri Mill you can follow for approx. 500 meters the left bank of the river, until you reach the remains of the bridge of the Falce (without crossing it) and then take the steep climb to the left that goes up to the Mestaiola of Sismano or, otherwise, you can head for the Mestaiola Sismano directly from the Olivieri Mill by the slightly longer but more comfortable alternative dirt road .

From the Mestaiola of Sismano (35) proceed along the road heading towards Castel dell’Aquila (literarily the Eagle’s Castle), through Osteriaccia (36), Poggio delle Mandorle (37) and Santomanno (38), always keeping on the right the unmistakable silhouette of Forte Cesare (39) (a big building, once a Fort). When you pass by the industrial area, take the provincial road that leads to the village of Castel dell’Aquila (40), dominated by the Church of St. Giacomo (St. James).

Those who do not wish to go directly to Amelia (a total of 31 km) can stop at Castel dell’Aquila and sleep at the parish church.

From Castel dell’Aquila to Todi (km 19)

From the junction at the exit of the village, near the pharmacy, head north on the old road Via di Valle Molina. After about 400 mt take to the left on the paved road next to the sports facilities until you reach some werehouses. Take the gravel road with the largest werehouse on the left, towards a small hamlet called Santomanno (38). At the first rural settlement go right, leaving behind the castle of Forte Cesare (39) that dominates the area, continue always along the same road uphill until you meet another dirt road (Poggio della Mandorla —37) and head towards the right (Osteriaccia —36 and Mestaiola —35). The Mestaiola of Sismano, in the local dialect “small majesty” or sacred shrine, is dedicated to St. Eurosia, placed on the hill. From the Mestaiola of Sismano, continue in the same direction to the North taking the path downhill that is hidden by the trees until you reach the valley and meet the river Arnata, always skirting the fence of the Azienda Faunistica Anguillara; the road becomes increasingly steep and rough, at the bottom are the ruins of an ancient bridge called Ponte della Falce (Bridge of the Scythe of the ancient Amerina) (34). After crossing the bridge, continue always along the fence of the Azienda Agricola Anguillara, until fording a small creek (the Civitella, a tributary of the Arnata). Continue for about 100 m. in the woods, then on a dirt road and after about 200 m. pass next to a newly restored mill, called Ciuccio or of the English (33). Leaving the Arnata on the right continue on the same road until you get to a beautiful ancient humpbacked bridge (Bridge of Pesciano —32). After crossing the bridge the road is fairly simple, because you take to the left and keep on the same road until ‘Ospedaletto of Vasciano (31), now incorporated into a newly built Country House. Continue on the same road for about 500/600 m. through fields and a small wood and then take the path that goes downhill to the left, through a walnut orchard and on the road that goes to Todi. If you miss the turning you will still reach the same road a bit further on, near an unmistakable sewage treatment plant. In this case turn to the left to the asphalt road, and then right to Todi that you can see on top of a very steep hill. Along this road you meet the shrine of Santa Maria delle Grazie (30), the shrine at Ponte Naia (29) and after the steep climb you will enter Todi from the Porta Amerina (28).