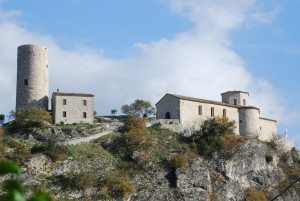 The first leg starts from Rimini Train Station, ideally “door” east of the Way. You cross quickly the historic center reaching the first hills behind the town and the Valley of Marecchia. In the city, the route touches the church of Santa Chiara, where probably San Francesco stayed and the ancient cloister of San Bernardino which is home to the Clarisse nuns. Then the leg rises rapidly towards the first hills behind Rimini, where you reach the Franciscan sanctuary of Santa Maria delle Grazie, protected by the Friars Minor. With several ups and downs you get to the suburb of Vergiano, at the beginning of Valmarecchia. Here an ancient tradition says  that St. Francis was hosted for a night in a modest house where he was offered a cypress stick as support for the journey, planted by the Saint in Villa Verucchio. That stick would later become the current ancient tree. Later the itinerary leads you to the beautiful historical and natural path up along the river Marecchia (possible detour to Santarcangelo), up to Villa Verucchio, where, on the hill above the modern town, is the convent of Santa Croce (quarters). An oral history tells that St. Francis, along the Valmarecchia, probably in 1215 from Rimini, stayed at a country chapel dedicated to the Holy Cross, and built a poor wooden hut. This is considered the nucleus of the monastery, documented the first time in 1311.

It is possible to visit the church, built in sec. XIV and consecrated 16 June 1400; the cloister with the famous cypress and the St. Francis chapel. Very interesting historical center of Verucchio that requires a deviation from the main leg.