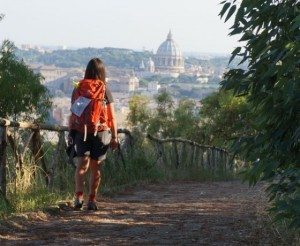 From La Storta (104) to Rome you should follow the Via Cassia because, though slightly longer than the Via Trionfale, it has pavements, while the other has none. Via Trionfale, starting from the Via Cassia (105) is better only at night time or during the holidays because there is less traffic. At Piazza Giuochi Delfici (106) take Via Camilluccia up to Monte Mario and rejoins the Via Trionfale at Piazza Igea, next to the Hospital of Don Orione (107). Do not forget to climb to the Observatory of Monte Mario (108) taking the road that goes under the arch to the left near a traffic lights just after Villa Stuart (from the Observatory you have a breathtaking view of Rome).

Returns to Via Trionfale and follow the road to the end of the descent of Monte Mario. On the left you can see the church of St. Lazarus (109), where once the sick pilgrims were treated before entering the city. Continue till merging with Via Leone IV, while to the right you can already see the Vatican walls. Cross Piazza Risorgimento (110) and take Via di Porta Angelica and in two minutes you will reach Bernini’s colonnade (112) and St. Peter.

But before entering the colonnade we suggest you stop at the Church of S. Pellegrino (111), situated within the walls of the Vatican, just inside Porta S. Anna where Vatican Gendarmerie and Swiss Guards normally serve. Ask the guards for the admittance to the Church located in via del Pellegrino (open every morning from 7am to 1pm, Mass at 7am). It’s a place full of history, that invites meditation and prayer, and evokes strong emotions in the pilgrim. It is the place where multitudes of medieval pilgrims have paused to give thanks for having reached the final and Holy destination of their journey after many dangers, hardships, fatigue, toils and tribulations of all kinds. A metaphor of the reward that awaits a well spent live in the Christian faith: a vision of after life, here well represented by an ancient fresco of Christ Pantocrator.

Before you leave do not forget to put a stamp on your credential!

Alternative route of the Insugherata Park

From number 1181 of Via Cassia (107a) you can enter the Park of the Insugherata thus avoiding Via Cassia and walking for 6 km in natural environment. This alternative route joins the main route near Don Orione (107), at Piazza Igea.

Starting from Piazza San Pietro (112), go towards Piazza Risorgimento (110) then take Via Leone IV and Via Trionfale up to Monte Mario. You can either go along via Trionfale until this road merges with the Via Cassia at the Giustiniana (105) (but we do not recommend it because it is very busy and there are no sidewalks), or otherwise we suggest once on top of Monte Mario you take Via della Camilluccia (107), go straight until you come to Piazza Giuochi Delfici (106) and then go left and follow the old Via Cassia to La Storta. Alternatively you can enter the Parco dell’Insugherata at Via Cassia n. 1181 (near the intersection with the Great Ring Road GRA) (107a) and then continue on Cassia to La Storta (104). erario del parco dell’Insugherata fino a via Cassia n. 1181 (pressi svincolo GRA) (107a) e poi proseguire sulla Cassia fino a La Storta (104).