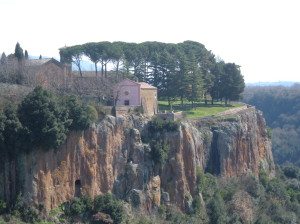 From the Church of San Famiano (70) take the road with the indication of San Famiano a Lungo (75) (the small shrine located about 2 km outside Gallese) where you can still drink water from a miraculous spring and continue to Corchiano through beautiful hazelnut groves; when you arrive at the Madonna delle Grazie (76), continue until you reach the Roman stone paved Via Amerina, which comes from Vasanello in the area Musale a) (77); take the Stone road and continue to Corchiano. Here you have two possibilities.

1- Go through the outskirts of town to reach the Church of the Madonna del Soccorso (79) and the southern Etruscan/faliscan necropolis walking along the authentic Roman stone Via Amerina, until you reach the carved road (81) that comes from the village (80) continue to the SP29 and the restaurant “Ragno Rosso” (82). At the electricity cabin, turn left and continue on that road, following the signs (red arrow and indication Via Amerina ) up to a field sloping down to a creek that has to be forded.

2- Starting from the area Musale b) (78) go into the center of Corchiano (80) and then, close to the church of S. Egidio, take a picturesque “carved” road that leads, after crossing a bridge over the stream Fratta and another Etruscan carved raod (81), to the restaurant “Ragno Rosso” (82), then continue to the creek that has to be forded, as above.

Once you have crossed the creek, take a path on the right and after a few hundred meters, after skirting a kennel (83), you will meet the provincial road that goes from Fabbrica di Rome to Corchiano (near a field for motocross); cross it and go towards Falleri (84) and then to the archaeological site of Falerii Novi (85). Here are the archaeological remains of the ancient town and the basilica of St. Maria (Cistercian). The Roman city enclosed by walls built in 241 BC, is crossed by the Via Amerina which forms the cardo, (main road in latin). Take the road to the modern housing development of Parco Falisco (86), cross it completely and follow the signs for Cavo degli Zucchi (87) (where the road is “carved” into the tufo), the most important and spectacular archaeological site of the ancient Via Amerina. In fact, it is the necropolis of Falerii (in the south of the city, located along the way). After admiring on the left the two most spectacular chamber tombs at the end of the long stone paved road, cross a wooden bridge held by metal tubes and continue along the old road until you reach the village of San Lorenzo (88). Leaving the restaurant “la Vecchia Quercia” on the left enter again into the ravine, or cut road under the ruins of the Tower of Stroppa, or of the Island with also remains of a bridge. Cross a creek and climb on the other side making sure to take the left path, indicated as a mountain bike track. Carry on, without losing spirit for about 2 km, along the path that leads along the old road, easily recognizable by the excavated caves and ancient tombs. When you come to a shooting range for archers (you can see the silhouettes of the targets), again go down and up a ravine crossing a small creek, until you emerge near a farm house in front of which passes a small road going East/West, always following the signs of the Comprensorio della Via Amerina.
At this dirt road, called “Via Pianella” (89), you can opt for two solutions.

1- Go direct to Nepi (91) that is easily reached by the ancient route following the signs, gates, fences and wooden bridges of the Comprensorio della Via Amerina (please close the gates after passing because of the grazing cattle, or use the pedestrian swing gates). The stretch of Via Amerina that enters the town of Nepi has been named Via San Paolo.

2- If instead you wish to head for the town of Castel S. Elia and the Sanctuary of Santa Maria ad Rupes (90), take via Pianella to the left. We recommend this second solution in order to see this important Marian shrine.

Visit the stairway down to the Chapel of the Madonna carved by P. Rodio, a companion of St. Benedict Labre, and the underlying VII-VIII century Romanesque basilica of St. Elia. You can also ask for accommodation with the religious congregation of St. Michael the Archangel (Polish). Holy Mass at the Marian shrine is at 6pm.

Alternative route from Vasanello to Corchiano
The ancient Via Amerina, at least in the year 241BC did not pass through Gallese, but went to Corchiano (the ancient Fescennium) and headed directly towards Orte and Amelia (through the present town of Vasanello (73), a faliscan pagus identified with the Castellum Amerinum of the Peutingerian Table). Therefore, the pilgrims today going to Rome can avoid Gallese, head directly to Vasanello from Orte (along the deviation to Palazzolo that replaces the original ancient road currently unapproacable marked in brown on the map) (74), and continue following the old road from Vasanello to Corchiano, where near the area of Musale (77) it rejoins the Cammino della Luce coming from Gallese.