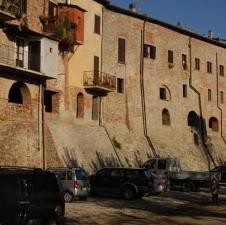 Following the signage, begin to descend until reaching a crossroads with a small shrine. Turn right toward the Eremo del Buon Riposo and Città di Castello here. The route has long stretches under the sun, so remember your hat and water. You will be walking on an asphalt road which intersects another with heavy traffic (km 2.77), which you will leave after about 100 meters, turning right onto an unpaved road at the crossroads. The route begins to climb among horse-chestnuts and oaks, though there are no steep stretches. At the marked fork (km 4.91), turn left and and, after 300 meters, continue steeply to the right. Soon you will reach Le Burgne (km 5.26). The route here climbs and descends, with more or less level stretches, and is not challenging. From here you can enjoy a 180 degree view over the Tiber valley and Umbrian landscape, with its patchwork of hills, villages, woods, and churches. At the marked crossroads (km 6.76), discend to the right. Here there have been reports of dogs; if you encounter them, proceed at a distance without breaking into a run. Often, just bending over to pick up a stone is enough to frighten them off. At the bottom of the descent, you will arrive at località Caldese (km 8.12), where you will walk a brief stretch of asphalt and then take a dirt road which runs along a buffalo ranch (km 8.70). The route begins to climb until reaching the top of the hill (km 9.62). At the località San Lorenzo crossroads (km 10.85) near the land belonging to the Archeologia Arborea Association, the signage has been corrected with paint and you descend to the left for Lerchi. From here, if you continue along Via Toscana (which has narrow stretches with no pedestrian shoulder), you could arrive in Città di Castello in less than an hour. If you prefer to lengthen the walk but avoid traffic, turn right at la Chiesa della Madonna della Speranza (km 12). Begin climbing a dirt road until reaching a pretty shrine dedicated to the Madonna at località Varzo (km 14.52), 516 MAMSL. From here, continue on a level stretch until the crossroads; turn left, following the painted markings on a tree. You will begin to see the cylindrical belltower of Città di Castello’s duomo in the distance. Shortly after, a votive shrine (km 15.2) and iron cross mark the Eremo Francescano del Buon Riposo. Begin descending along a wood to reach the foresteria di Villa la Montesca (km 17.63). The route continues without intersections on level asphalt; near a grey gate, descend to the right as the route becomes more steep. At the highway overpass, you will reach the outskirts of Città di Castello. Continue along Via Romolo Carpini, until the crossroads to cross the bridge over the Tiber (km 19.63). At the traffic circle, keep left and take Via Nazario Sauro; after less than 500 meters, begin climbing on the road to the right: Via Pomerio Rodolfo Sivieri. The simple and elegant facade of the Duomo di Città di Castello (km 20.5) greets pilgrims traveling to Assisi.