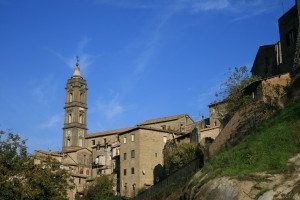 From the Sanctuary of Santa Maria ad Rupes in Castel S. Elia (90) you reach Nepi (91) in about 3.5 km. After visiting the Catacombs of St. Savinilla (92) at Nepi take Via Selciatella that starts from the fortress and continue towards the Cassia. When you have reached the mineral waters spring of Nepi (ancient baths of the Gracchi) you will see also the beautiful Nepesino bridge (241 a. C) (93) on the Via Amerina and soon after a long stretch of ancient paving which runs to the left of the asphalt road. Once you meet the Cassia (94), turn left on an abandoned road that goes to an old post station. After passing a church, a bar, a restaurant and some shops, go around a furniture store and cross the SP37, continue on an abandoned stretch of road that runs along the Cassia (a very busy main consular road that has 4 lanes of traffic) until you will merge on to it (against the traffic, taking great care): After only a hundred meters you can turn left on the first link road of the junction “del Pavone” (95) and continue on the SP10A going towards Campagnano di Roma.

There also is a beautiful trail that starts from the mineral water spings leading to Fontana Latrona in Campagnano di Roma, along the ancient route of the Via Amerina: this route avoids the roads and the junction on the Cassia, but it isn’t always easy to do.

From SP10A Via del Pavone (97), to avoid a long stretch of road, take via Vignacce and continue along Via di Fontana Latrona (96) and emerge again on SP10A just before the junction of Pavone (95) with the SS Cassia (the road is marked by the yellow arrow and the logo of the Pilgrim). At the junction turn right along the Cassia for just over a hundred meters, paying attention to the heavy traffic, and then turn right along what remains of an abandoned road that runs along the SS Cassia. Cross the SP37 and head towards the old post station of Settevene. You will notice on the right, near a restaurant/bar the sign of the Via Amerina;

continue along the abandoned road for another 300 meters (94), then turn right to Nepi (Via dell’Umiltà). As soon as possible walk on the ancient stone pavement of the Via Amerina, on the right before and after the intersection that leads to the ancient Baths of the Gracchi where now stands the factory of the mineral water sping of Nepi, near the old Nepesino bridge of the Via Amerina (93). Continue along the same road until you reach the town of Nepi (91) and the catacombs of S. Savinilla (92). From the mineral waters you can take the secondary road called Cavoni, but it is not always well kept. There also is a beautiful trail that starts from Fontana Latrona in Campagnano di Roma leading to the mineral water spings, along the ancient route of the Via Amerina: this route avoids the roads and the junction on the Cassia, but it isn’t always easy to do.

For those who wish to go to Castel St. Elia (90), from Nepi take the paved road starting from the monumental arches of the aqueduct at the corner of the fortress.