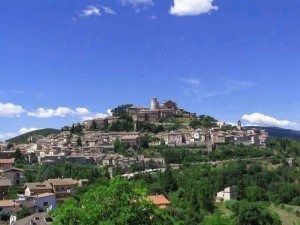 The distance from Castel dell’Aquila to Amelia is about 13 km, the route is quite easy and thoroughly marked with signs of the Cammino della Luce. It runs almost all flat or downhill, except for a slight rise from the bridge of Santa Maria in Canale to the ruins of the Castle of Lagoscello and another climb of about 1.2 km from the bridge of San Leonardo to the Capuchin Convent (formerly ancient hospital of St. James). For those taking the Franciscan Ways of the Amerini Mountains, with a small detour of a few kilometers, you can visit the Franciscan grotto, a shrine above Collicello, and the nearby ruins of an ancient Benedictine monastery (ask for information on the spot).

Coming from Castel dell’Aquila (40) follow the provincial road that goes towards Amelia, after 1.6 km, at a holy image (41), take the dirt track on the right that runs along the stream of the Rio Grande to the bridge of Collicello (42). Briefly transit again on the provincial road to Amelia and at St. Maria in Canale (43) turn left after approx. 200 mt, on a dirt road to the right. Walk to the top of this road to Lagoscello (44) (on the right you can see a small lake at the bottom) and down until you meet again the same provincial road near the village of Sambucetole (45). Without entering the old part of the village, take the road with the indication Cappucini, that leads to a convent of Capucin Friars (46) built on a former pilgrims hospice. From the forecourt, the profile of Amelia can be clearly seen only 5 km away. Continue further on the same local road until you reach a dirt road along the banks of the stream Rio Grande (47), and follow it to a new wooden bridge, after crossing it there is a final brief climb to Amelia (48).