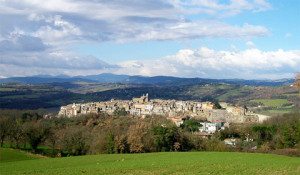 From Amelia, that is still in Umbria, to Orte, in Lazio, you may follow different paths: the first is the provincial road know as Ortana, joining the two centers in about 15 km. There are also other routes that have in common the first part until you get close to the border between the provinces of Viterbo and Terni (Umbria and Lazio), where you can opt for a valley road along the stream of the Rio Grande, or continue along the ridge. The two roads rejoin about 2 km before arriving at Orte.

We obviously do not recommend the provincial road and suggest to opt for the other two: the ridge road is shorter (about 16 km); the valley path is a bit longer (about 18 km) but

much more interesting from the natural (a sulphurous spring near the Rio Grande) and archaeological point of view, as it follows the ancient Via Amerina. Notably this second route passes near the remains of a Roman funeral monument and the ruins of the ancient port of Seripola, on the river Tiber.

Starting from Porta Romana (48) take the provincial road to Giove (named Via I Maggio in the vicinity of town) for about 3km to the Lourdes grotto in Montenero (49). From there, take the road of S. Silvestro and follow it for about 1 km and 400 mt. The last stretch runs along a large vineyard (50), which then meets the traces of ancient road that you can guess underneath the brambles, on the right. At the end of the vineyard, continue along the ancient route near some tall trees. At the end of the field, near a newly built villa perched on the hill, the road divides (as duly marked by the signs of the Cammino della Luce) (51).

- The ridge route: go left for 100 mt. until you reach the provincial road from Amelia to Orte,(52) take to the right and follow for about 2, 5 km, passing in front of the restaurants Campo Antico and Vecchia Fattoria and another house with a tower, all on the right, until after a curve you see a dirt road on the right in rapid ascent (53); take it and continue along the ridge keeping close a big building called Cimacolle (54). and then along the bottom of the fenced property of Ciucci for about a kilometer to the crossroads with the main road coming from Penna in Teverina (55). Opposite you will see the indication of the ancient port of Seripola (61) (those wishing to visit it, must go down to the Tiber for 500 meters, passing a farm by the name of La Chiocciola and then return by the same way) (55). Continue for Orte, turning left on the provincial road for 700 mt and then taking a dirt road on the right that descends toward the Tiber river and the motorway A1.

- The valley route: From point 51 turn right and descend the dirt road leading to a big farm called Rio Grande/Ayala (56), head to the dirt road through the fields until you meet some old oak trees. Turn left along the path that follows the ancient route of the Via Amerina (57), where ruins of an ancient Roman mausoleum emerges among the vegetation. Ford the stream Rio Grande, then turn immediately to the right and follow the dirt road along the vineyards until you reach a location with springs of volcanic origin (58), characterized by gas and sulfur. Continue along the right bank of the Rio Grande. If you wish you can make a stop in the pilgrim resting point of the Parish of St. Maria delle Nevi in Penna in Teverina, near the ruins of an ancient water mill (59). From here, if you want, you can go to Penna in Teverina, just 3 km away, where you can sleep in the parish hostle located in a beautiful spot, overlooking the Tiber valley, and continue the journey the next day. Otherwise, passing the pilgrim resting point, continue on the dirt road leading to the provincial road, cross it and continue downhill for approximately 300 meters until you reach a bridge over the Rio Grande (60); without going over the bridge, follow the signs, and ford the stream after about 500 meters. Continue on the left bank of the stream to the confluence with the Tiber, just beyond which you can visit the ruins of the ancient river port of Ameria/Seripola (61). The road then climbs up to the farm of La Chiocciola and again up to the provincial road, meeting point with the other route (55). Continue to Orte on the right, after 700 mt, then turn again right on a dirt road that descends toward the Tiber river and the motorway A1.

At this point the two routes meet: Therefore from the Penna Orte road, going down to the Tiber, at the first intersection with a small local road, continue left for 1.1 km until near the Church of San Lorenzo (62), with documented evidence of the passage of St. Francis (the church is no longer opened for worship but the owned is available on request for visits).

Then continue through an underpass and stop at a fountain with abundant water (63); 100 meters from the fountain, turn right on the provincial road, cross the Tiber and the motorway, and just after the bridge, at a curve, take the local road that climbs dramatically up to Orte, entering the old town through Porta San Cesareo (64).

From Orte to Amelia

Start from Porta San Cesareo (64) go down to the bridge over the Tiber River then take immediately left along Via dell’Acqua Acetosa (63), take the highway underpass to the Church of St. Lorenzo (62), continue to the left for about 700 meters up to a dirt road on the right that leads to the main road to Penna in Teverina. Go right up to the junction for the ancient river port of Seripola (55).

At this point you can take the ridge road on the right, through the vineyards until Cimacolle (54) and continues until you get onto the SP Amelia Orte (53) near the border between the provinces of Viterbo and Terni (Lazio and Umbria) and from there (52), you can either continue along this road to Amelia or along the ancient Amerina road that lies between two properties, (51) until the big vineyard called Pizzogallo (50), after which you meet, near St. Giuseppe, the dirt road of St. Silvestro which ends in Montenero (49) on the SP that leads to Amelia from Giove (48).

Alternatively you can follow the valley road along the Rio Grande, of higher historical and environmental interest. From the junction to the port of Seripola (55), you can reach the site of the archaeological excavations on the Tiber (61) passing through the property of La Chiocciola. Continue along this road near a place called Castiglioni along the Tiber River and the stream Rio Grande until returning to the SP to Penna, near the bridge over the Rio Grande (60). 300 m. after the bridge take a dirt road to the right that goes to the Rio Grande, the Pilgrim resting point (59) and the sulphurous area (58). Follow on the right bank of the stream until it reaches a ford (indicated by a road sign) and after 100 meters you will encounter the obvious ancient route of the Via Amerina and the remains of

an ancient Roman mausoleum (57 ). Further on, under large oak trees go to the right towards the Country House Rio Grande —Ayala (56) and then up to the meeting point with the ridge route (51). Next to the gate to the large property of Totano and two newly built houses surrounded by a wall of large boulders on the right, take the old route at the border between the properties marked by tall trees, until reaching the vineyard of Pizzogallo (50) and continue along Strada di St. Silvestro towards Montenero (49) and Amelia (48).