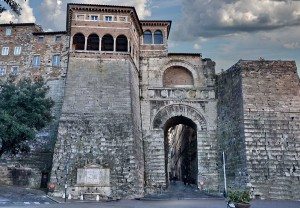 The Etruscan Arch (III-II Century b.C.) is a monumental door North Oriented, also named Porta Pulchra or Boreale, the most important one of the ancient walls, built with travertine blocks. For its dimensions, 11 m high, it is the biggest of the ancient Etruria. It was restored by Ottaviano Augusto, hence the name. It is flanked by trapezoidal towers; the entrance is surmounted by two round arches, one above the other, of which the upper one, today closed in a later period than that of the construction, was before open for military purposes. Between the two arches an entablature, decorated in squares (metope) with Doric shields alternating with ribbed little pillars (triglifi) surmounted by Corinthian capitals. On the inferior arch still visible the inscription: “Augusta Perusia”, written during the restauration in Augustan age after the “bellum perusinum”- perugian war (40 b.C). A bit above, the inscription “colonia vibia” recalls the emperor Vibio Treboniano Gallo (251-253 AD). At the basis of the left buttress there’s a XVII Century fountain and above the monument a renaissance loggia.