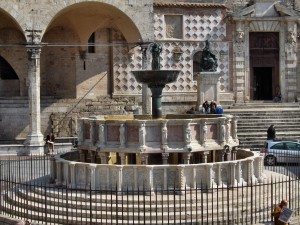 “The “Fontana Maggiore” (Major Fountain), iconic monument of the city, is a real medieval Italian sculpture masterpiece made between 1275 – 1278 by Nicola and Giovanni Pisano. Right in the heart of the city, formerly known as “piazza Grande” (Big Square), it consists of two concentric polygonal basins, surmounted by a bronze cup, forged by the Peruginian foundry man Rosso Padellaio, in turn crowned by a group of three “nymphs” carrying water, who represent the three theological virtues (Faith, Hope, Charity). Its decorative elements represent the Universal Medieval Knowledge, gathering civil and religious themes together, in continuity with Classic Culture.

The lower basin is decorated by 50 bas-reliefs representing the months of the year with scenes of agricultural works and zodiac signs, two Aesop fables, scenes from the Bible and the history of Rome, the Grifo (Griffin) and the Lion, symbols of Perugia. The upper basin is decorated with 24 statues representing saints, biblical and mythological characters such as Euliste, believed to be the founder of the city, allegoric characters, as the “Domina Perusia”, represented with the horn of plenty, to whom the Trasimeno Lake donates the fishes and the countryside of Chiusi the wheat.