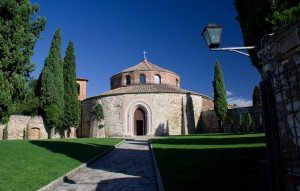 Built in an area always considered sacred, it is one of the most ancient paleo Christian churches in Italy (V-VI sec.) and the most ancient of the city. It has a circular floor plan, originally with four chapels arranged in a Greek cross, oriented according to the cardinal points. Light enters from twelve windows in the drum. Inside two concentric areas, separated by sixteen Roman Columns with Corinthians capitals and basis, different from each other both for their heights and for the materials they’re made with, being reuses from temples of Roman age. Traces of frescoes of medieval origin suggest a more colourful aspect in the past. Walking on the left side the Madonna del Verde (Madonna of the Greenery) can be seen, a copy of a detached fresco of a Maestro of the Senese school, today exhibited in the Museum of the Cathedral. On the right side the baptistery, with votive frescoes by an Umbrian painter of XV Century. In the second chapel “del Crocefisso” (of the Cross) a canvas of the XVIII Century, “La Trinità e le anime purganti” (Trinity and the souls in Purgatory). The Altar is right at the centre of the church and is made by an ancient marble plate on top of a column. Outside some works from the XIV Century can be detected, among which the ogive portal.