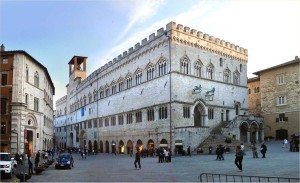 Historic site of the free Municipality, was built in different stages, including three pre-existing edifices, the Church of San Severo and the Tower of the madonna Dialdana in the north-west side. From the outside it is characterised by a series of mullioned windows and an imposing Gothic portal, surmounted by the bronze copies of the Griffin and the Lion – the originals (1271-1281) are visible inside the lobby of the Palazzo. In 1353 the XIV Century building phases ended, right to the via dei Priori, including the major portal, on which bezel are the copies of the statues of the three patron saint of Perugia – Saints Lorenzo, Ercolano and Costanzo (the originals are inside the Galleria Nazionale). Between 1429 and 1443 the building was restarted; this phase, covering the upper part of via dei Priori with an arch, incorporated a mediaeval tower, later used as bell tower. Greatly changed under the Pope dominion, the Palace was restored as before only after 1860. Palazzo dei Priori hosts, beside the institutional site of Perugia Muinicipality, the prestigious Galleria Nazionale of Umbria, with more than 3000 art works from the XIII to the XIX Century, and the historic sites of the two main medieval Guids: the “Nobile Collegio del Cambio” (Moneychangers Guild), frescoed between 1498 and 1500 by Pietro Vannucci, also known as il Perugino and the Nobile Collegio della Mercanzia (Merchants Guild) with the interior covered in walnut and poplar wood, preciously carved. Opening Hours Galleria: Tuesdays – Sundays 8:30 am – 7:30 am (ticket counter closing at 6:30 pm) Closed: Mondays October – February; 1 January, 1 May, 25 December Extraordinary Openings: all Mondays from March to September, h. 12:00 am -7:30 pm . Entrance: € 6,50; reduced € 3,25 for EU citizens of 18 – 25 years of age; free of charge under 18; inside the Card “Perugia Città museo” Wheelchair accessible