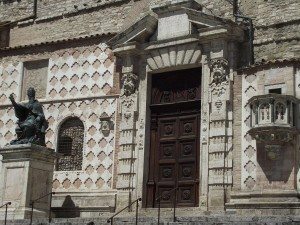 Built in the XV Century, finished in 1490, as a replacement for the earlier Romanesque cathedral. In 1729 to the unfinished façade a baroque portal was added, by Pietro Carattoli. On the left side, facing Piazza IV Novembre, a noteworthy entrance by Galeazzo Alessi of 1568; on the right of the door the pulpit, from the XV Century, where the Franciscan monk S. Bernardino used to preach, and, on the left, the statue from the XVI Century of Giulio III (the Pope that rendered to Peurgia a certain amount of autonomy) by Vincenzo Danti. Above the Portal the wooden cross by Ciburri, placed outside the church by the people of Perugia to protest against Papa Paolo III, during the so-called “Guerra del sale” (Salt War), in 1540. On this side lean the Logge di Braccio Fortebracci of 1423, linked to his residence, today destroyed. Under the arches still visible the octagonal base of the bellower of the original cathedral.
The interior is a huge edifice with three naves of the same height. The Vaults, supported by octagonal pillars, were wholly decorated during the XVIII Century. Among the most important artworks to be seen are: the Deposizione (1569) by Federico Barocci, inside San Bernardino chapel; the fine chiseled reliquary of the S. Anello, in the chapel bearing the same name, ring that is considered by tradition of the Virgin Mary; the canvas by Jean Baptist Wicar, substituting since 1825 “lo Sposalizio della Vergine” by Pietro Vannucci known as il Perugino, robbed during Napoleonic plundering an today at the Museum of Caen (France); the Madonna delle Grazie (closed to the column), by Giannicola di Paolo, follower of the Perugino in XV Century, object of popular devotion. In the left nave is the Gonfatlone (Banner) by Berto di Giovanni of 1526, depicting the numerous towers of Perugia, before the building of the Rocca Paolina.
Inside the Cloister the entrance to the Museum of the Cathedral, from which one enters to the archeological area of the “San Lorenzo excavation”.